Home > What We Do

BRIDGING THE GAP BETWEEN WILDLIFE CONSERVATION AND COMMUNITY WELFARE IN AFRICA

Africa is a vast continent with 359 national parks declared for conservation in 53 countries. Within the 15 countries which make up the Southern Africa region, there are 152 national parks, which does not take into account the considerable wildlife protection areas that are designated as private game reserves, forest reserves, marine reserves, national reserves and natural parks. With all this space made available for nature conservation, you would think that wildlife is well protected and flourishing in Africa. Sadly, this is not the case. With a human population of over a billion people, many of whom live in poverty, the potential for human-wildlife conflict for arable space and livestock grazing coupled with the threat of wildlife poaching poses a great risk to the survival of wildlife in Africa.

It is against these odds and with regard to these areas of conflict that the SATIB Conservation Trust seeks to find solutions and fund approved wildlife research projects, anti-poaching programmes and community education initiatives that deliver tangible and sustainable results to reduce conflict between the human and animal inhabitants of Africa, ultimately ensuring the conservation of the continent’s wildlife.

Much of the research being conducted in Africa is by a group of dedicated, hard-working scientists, local community members and volunteers who need your help and support. Every donation to the SATIB Conservation Trust makes a difference and 100% will go to your selected cause (our admin costs are sponsored separately).

Every journey begins with a single step – why not take your first step by joining our community today. Subscribe HERE. 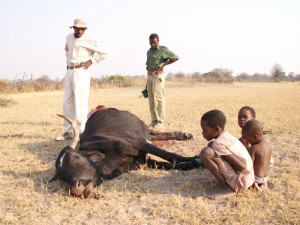 Human-wildlife conflict poses a significant risk to the survival of all animals in the wild. Large predators often prey on the livestock, predominantly cattle, oxen and donkeys, of communities which live in the reserves or on their borders. Livestock is the main source of wealth and power in many rural Africa communities and losses to predators such as lion, leopard, cheetah, hyena and wild dog represent a significant proportion of the overall wealth of relatively impoverished rural communities. One of the consequences of livestock predation is retaliatory killing of these carnivores by people affected by depredations. Research suggests that improved herding practices such as daytime tending of stock and use of protective bomas to protect stock at night are methods that could reduce losses and help to alleviate conflicts with predators. The elephant is another species that is often the cause of human-wildlife conflict as they destroy crops. There are a series of simple deterrents which are quite effective in driving elephants away – putting chili on fences and burning them in fires to produce an acrid smoke works well as does the design of a bee hive fence which scares the elephants off. Researching human-wildlife conflict will ensure the development of more solutions such as these to minimise economic loss to animals. Projects like Hwange Lion Research Project and Elephants for Africa in Botswana are researching and implementing innovative solutions to tackle these issues.

The attitude of local communities towards conservation will eventually secure the future of African wildlife and for this reason, educating people about the benefits of wildlife is an essential element of conservation efforts on the continent. Most community education programmes focus on teaching people about ways to reduce conflict with wildlife as well as highlighting the economic benefits of wildlife including tourism. School children are a focus of many community education initiatives and many conservation programmes include outreach projects which involve children in order to educate them about conflict management and the importance of conserving wildlife both for the sake of biodiversity and for its economic benefits to the community. The SATIB Conservation Trust has assisted several projects in developing illustrated comics which are distributed in schools and children are encouraged to take home and share with their communities. The Trust has also produced booklets for distribution to tourists to explain the importance of research projects within conservation reserves. Several projects, such as the Hwange Lion Research Project’s Long Shield Lion Guardians, have instituted a system of employing local people to act as a link between conservationists and their communities, providing information and encouraging cooperation. 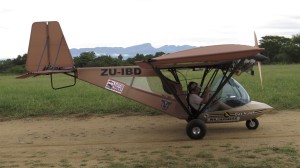 The poaching of animals for their horns, tusks, bones (as is the case with lions) or hides poses one of the most significant threats to the survival of many species in Africa including rhino, elephant, lion, leopard and cheetah and anti-poaching initiatives are the focus of many conservation projects. Poachers have become organised and almost militarised in their activities and significant steps need to be taken in order to combat their actions. Anti-poaching units that patrol reserves and pass on information to local authorities are invaluable. Patrolling from the air allows for the monitoring of vulnerable areas giving incredibly accurate indications of what is happening over large tracts of land, parts of which are often inaccessible by foot or vehicle. The SATIB Conservation Trust, in collaboration with the Wilderness Foundation has provided a 6 cylinder Jaribu Bat Hawk Light Sports Aircraft, to the Lugenda Wildlife Reserve in Mozambique to assist with anti-poaching efforts and more initiatives like this could make inroads in the war against poaching.

The real crux of conservation efforts is research. Some projects are undertaken to understand the demographics, social structure and dynamics of an animal population as well as their specific ecological and social requirements. Studies of the threats facing a species in a particular area can inform long-term conservation management plans to ensure their survival.

One of these threats is disease. Many diseases in wildlife populations can be transferred to domestic animals (and vice versa) and in some cases to humans and this research is essential for conservation plans.

Research that seeks to gain an understanding of both the underpinning ecological factors and the human socioeconomic factors that contribute to human-wildlife conflict situations is another important area of research throughout Africa whilst other research projects aim to gather data about the long-range movements of animals between protected areas. This research underscores the importance of preserving corridors of natural habitat to allow for genetic diversity, avoiding inbreeding – an essential element in the long-term survival of a species as a whole, as well as providing opportunities to escape natural & unnatural threats. The Hwange Lion Research project is one of the projects undertaking leading research across multiple areas and is one of the most intensive and long-term lion projects in Africa. Elephants for Africa have an holistic approach to their research incorporating long-term monitoring of elephants, elephant behaviour and wildlife-livestock disease interface alongside the boundaries of wildlife areas.

Every journey begins with a single step – why not take your first step by joining our community today.

Find out more about the amazing work that we do by getting the latest SATIB Conservation Trust News delivered straight to your inbox.